There’s no room for anger in Ashton Lambie’s athletic life. But madness is different. With Lambie, a certain madness just scatters around.

That’s because the individual pursuit isn’t an Olympic event in 2020. But the team pursuit is. And in team pursuit, being first across the line doesn’t mean squat. The clock keeps running until your team’s third racer crosses. By that metric, Team USA currently sits 10th in World Cup points. And only the top eight go to Tokyo.

“Right now, we’re 540 points behind Switzerland,” he said. “We need that to narrow.”

Lambie is a powerful weapon in that chase. But there are limits to what his power can do.

In the four-rider, four-kilometer event, Lambie will often pull at the front for the entire last k, offering up a slow, ruthless acceleration. The fourth rider may burn off, but ideally, riders two and three stay tucked in and hold on behind him as the world goes kaleidoscopic with mad effort.

Should riders two and three lose Lambie’s wheel, the absence of slipstream will hit them like a firehose and they’ll hemorrhage speed. When they feel this happening, they’re to yell, “Steady!”—the cue for Lambie to relent just a hair. But with speeds around 40 mph, those calls don’t always make it through the wind to Lambie’s ear. Or he may judge, given the time gaps, that steadiness is a luxury Team USA can’t afford.

“If we stay together, but at a pace too slow for our goals, what good is that?” So sometimes, Lambie will go full YOLO and just hope something sticks. If it doesn’t? Well … number three pops. Number two pops. And there you have it, folks. Yard sale. Bodies strewn across the track.

“Tokyo is our number one goal,” Lambie said. “But whether we make it there or not, I’m trying to balance everything and figure out: What do I want to do next?”

Team USA’s track cycling budget isn’t infinite. They’re competing at only a handful of World Cup events, so their opportunities to score points and build experience are fewer. To expand his track experience, Lambie also joined an elite trade team, Huub Wattbike, in Derby, England. He’s raced for Huub at events where Team USA is not participating.

Huub and a couple other trade teams have surged at these World Cup events and shocked more than a few national teams in the process. Then, out of nowhere this summer, the UCI responded with a rule change, barring trade teams from World Cup competitions. (If you can’t beat them, disinvite them.)

It’s one more case where madness has nudged Lambie out of an opportunity to compete, and left him asking: What’s next for me?

Given his current strength and ability on the bike, the answer to that question is pretty much whatever he wants.

Pro road racing is full of stars who made their starts in other disciplines. Sir Bradley Wiggins famously made the leap from track to road and went on to win the Giro d’Italia (2010) and the Tour de France (2012). Peter Sagan was a junior world champion on the mountain bike before sliding to road and winning seven of the last eight green jerseys at the Tour. And Wout van Aert hopped the barrier from cyclocross to light up Team Jumbo-Visma this year. 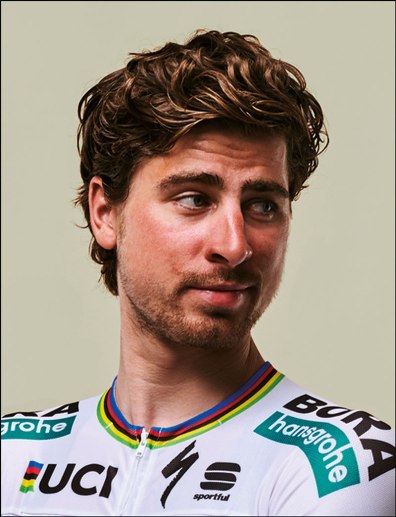 People tell Lambie all the time about his wild potential on pavement.

On those highly regimented pro tour teams, there’s a freedom you give away, he said. You race when, where and how they say. “And these world-class televised events,” he said, “they’re fucking stressful. And they don’t spark joy.”

If Lambie truly is in a position to do whatever he wants on a bike, why would he pick something that doesn’t bring joy? “Racing gravel—racing the Solstice—that’s not stressful,” he said. It’s joyful.

“And what about setting the record for a ride across Nebraska or Montana—shit like that?”

His Team USA calendar includes a World Cup race in Glasgow, Scotland. Afterwards, he’s got a plan to bike his way some 300 miles south to Huub headquarters in Derby, along a route no one’s ridden before, staying in little Scottish hunting lodges called bothies along the way.

“Now that sounds fucking sick,” he said, his joy tossing mad little sparks on the bike-shop floor. He spoke in the back at Method on a Wednesday evening—a little removed from the good people of Lincoln shifting gears from coffee to beer at the bar out front.

He was relaxed back here, sipping on a beer and surrounded by bikes in varying states of race readiness. Lambie can do laid back—but even that comes with a racer’s vigor. On his right shoulder is a tattoo of a pineapple wearing sunglasses, rigidly vertical in a hammock strung between palm trees. Mellow, yes, but intensely so.

When he listens, he’s fully keyed in. Ask him a yes-or-no question and a maybe is unthinkable. Even a simple yes can still be too equivocal. He’s more likely to answer, “Absolutely—100 percent.” Not just yes, but yes and yes and yes. All of it. Yes.

Given the choice between a pro tour role and a backcountry road, Lambie is more than a little bit country. He’s all the way there. This choice to put bike-packing above Paris-Robaix, the Solstice above the Tour, may strike some folks as straight lunacy. And Lambie’s OK with that.

People who don’t get it—many of them mediocre racers like me—are liable to say, “If I was that level of freak, you can bet your bottom I’d be out there mixing it up with Peter Sagan.” As if divine freakishness were all that separated a Lambie from a me.

When Lincolnites call Lambie a freak, a beast, we mean it in the best way. We’re talking about his stupendous natural ability. Talent. His mad genius. And that idea of the phenomenal performer as genius pushes me to one more Nietzsche quote. (Bear with me for a few philosophical seconds.)

“Our vanity, our self-love, promotes the cult of the genius. For if we think of genius as something magical, we are not obliged to compare ourselves,” Nietzsche said. “To call someone ‘divine’ means: ‘Here there is no need to compete.’”

It’s clear Lambie has thought through cycling’s version of the “cult of the genius.” He knows what it’s like to be lauded (and dismissed) as a freak of nature. And he recognizes what that perspective often overlooks.

“Nobody wants to feel like their all is less than somebody else’s,” he said. “But there are loads of people out there who have never seen how hard hard work is.”

Instead of saying, “Dude, you outworked me, and it shows,” we’d much rather say, “Lambo’s a friggin’ BEAST!” It’s a compliment. And an excuse to look no deeper.

Lambie pegged me (correctly) as a somewhat different type. I realize that he and I are separated by far more than a chasm of god-given talent. There are also chasms of dedicated time, work and so much pain between the hims and the mes of the cycling world—chasms that I frankly have zero interest in even entering, let alone crossing.

He admitted, “I’m crushingly sore every day. A lot of times, I can’t sleep.”

He can spot when other riders are in similar states of expenditure. “You can just tell when you look at them.” It’s more than tired. “We call it ‘being boxed.’ You’re deep down in there, in that uncomfortable place.”

It doesn’t take beastliness to cram yourself in there. Nor is the view from inside that box darkly romantic or exclusive. “It’s just fucking work and it’s hard.”

Lambie has no intention of spending the rest of his life being boxed. “I won’t be an elite masters track racer,” he said. “I just won’t.” Nor is he about to step out of that box just now—not with the world-class hammer he’s swinging. You can light the box on fire. Olympics or no Olympics, Ashton Lambie’s staying.

“Would I carve five years off my life right now to win a world championship this year?” he asked. “Absolutely, 100 percent.”

4 thoughts on “Like a Broken Record: Ashton Lambie sets (and resets, and sets again) his mad-world record”