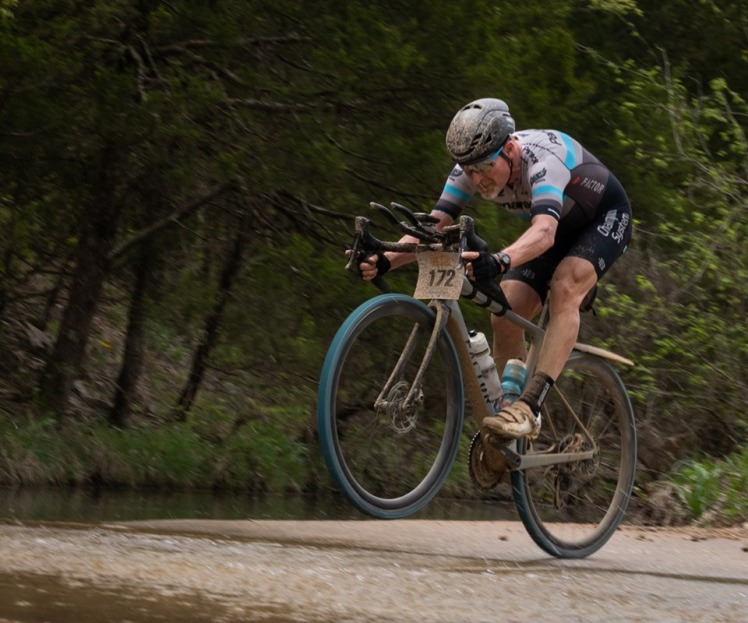 There were two neat dings in the tailgate, identically deep and perfectly horizontal, like some kind of metallic snakebite. Above the fang marks was the print of a blunter animal: a rutting bighorn, maybe.

In those three dents—two pricks and a punch—you can learn a few things about Mike Marchand.

For one: The 2009 Dirty Kanza and 2010 Gravel Worlds champion still goes fast. (His last Garmin reading before he struck the suddenly stopped pickup was 23 mph.)

We can tell he runs aerobars. Their fangs are what struck the truck first.

And, given the lack of gore inside that largest dent, we can also conclude that Marchand was, praise God, wearing his helmet.

“I crumpled and went straight down,” he said.

That helmet—an ABUS Aventor—did its job and spit out its ghost against the tailgate. Equally dead was Marchand’s gorgeous Team Panaracer-issued Factor Vista (MSRP for the chassis alone: $4,800). The carbon splintered fatally at both the head and top tubes.

His body’s initial status report was less clear. Marchand was conscious. That was good. He generally knew what was happening around him. Bonus. His straight-down plop also meant no road rash. But a Roman candle fired away inside his left arm.

“I figured my elbow was broken,” Marchand said. Oddly, however, his arm performed well on the bend-it-and-see-if-you-cry test.

The owner of a set of thrice-broken collarbones knew what a clavicle fracture felt like. This wasn’t that. He staggered up, got himself and the wreckage of his bike out of the downtown Kearney intersection, and generally gathered his shit.

The pickup’s driver stuck with him. This driver had been forced to pound his brakes when a truck in front of him stopped without explanation. Marchand couldn’t see the first truck and didn’t react in time to the second. And … snakebite. Fireworks.

“He was a good guy,” Marchand said of the driver. “He put my bike in his truck and gave me a ride home.”

There, Marchand made some rough guesses about how long it might take for his bruises to heal. His neck hurt. At 55, he realized he might not bounce as well as maybe he used to.

His wife, Carney, urged a trip to the hospital. He agreed, but required a shower first. Who wants to visit strangers all sweaty and with tailgate grit on your face?

Marchand arrived at Kearney Regional Medical Center. He would stay there for two and a half days. They found no Roman candle in his arm. But they did find four broken vertebrae in his neck.

News of the accident took a while to reach us in Lincoln. I learned on social media days later, thanks to a post I can no longer find from Bob Cummings, who directs Team Panaracer/Factor, where Marchand is a respected masters racer.

Details were sparse. A bike; a vehicle; a broken spine; a hospital. I asked around and didn’t learn much more.

Bike/vehicle accidents stir emotions everywhere. But it’s different in Lincoln. You want to watch a Lincoln cyclist’s eyes boil—talk about the drunk who ran Joe Billesbach’s elbow through his windshield and then left him there broken on the street. And we’re still utterly scoured from Randy Gibson’s death at the hands of another drunk. (Christy’s working with Lincoln Parks and Rec on a tribute to Randy in the form of a shelter for cyclists at a new Lincoln park. You can read about it and learn how to support it here if you’re interested.) Corey’s also been hit. Hell, Chris St. Pierre got pegged (for the second time!) on his way home from a city meeting on bike-safe streets.

So when vague news hit Lincoln of another friend struck on his bike, our experiences flooded in all the blanks. I worried for Mike. I also seethed for him.

What was it? Another drunk? Another cellphone? More road rage? Tell me. So I can rage back.

Mike Marchand wants you to know it wasn’t any of that.

“I’ve been riding a long time,” he said from his desk at the Kearney Public Library, where he works as a technical services librarian. “I’m pretty adept at anticipating problems and avoiding them. It’s just that this time something happened I didn’t expect.”

He’s not seething at anyone, he said, save maybe himself.

But Marchand’s no idiot. He’s an experienced athlete who made a mistake.

His attention lapsed for a silly second, and the cosmos spun its mighty wheel of consequence. The majority of stops on this wheel read: “Free! / Jack squat. / Close one, buddy!” A few others come back: “Get the ointment,” or “There goes a perfectly good jersey.” But Marchand’s spin happened to land on “Four broken vertebrae, some arterial damage and a compressed nerve.”

He’s paying in full for a mental lapse that usually costs nothing.

The answer’s complicated. Five weeks out, his body’s status report still comes back occasionally as mixed as it did in those first seconds on the pavement looking up at the truck’s back end.

In some ways, he’s doing astoundingly well. “I missed a week of work,” he said. He wore a brace for a little while, but not long. “I think they decided I looked dorky enough without it.”

Amazingly, he never showed signs of concussion. “The energy must have gone down my neck?” he said, perplexed, but grateful.

He also feels like the vertebrae fractures are healing well. It’s that Roman candle that gives him fits now. The compressed nerve fires pain, weakness and numbness down his left arm.

“I get on, and it feels like hour 12 at Dirty Kanza from the get-go.” (For the uninitiated, let me tell you: Hour 12 at DK is fire-ant uncomfortable.)

He has an old full-suspension mountain bike that puts him in a pretty upright, relaxed position that he can kinda-sorta minimally tolerate. His aggressive 3T Exploro? That’s a firm no at this point.

Still, he’s not discouraged. This is an injury that would make an athlete half Marchand’s age consider hanging it up. Others might heal, but be too skittish to return. But stopping hasn’t seemed to cross his mind. He just knows the time frame is something he can’t fully control.

“I can feel my fitness fading like a tan,” he said. That’s a hard thing for an athlete to tolerate. “When I was younger, I suppose I was more anxious to get back. But I’m 55. I know I’m fighting the clock anyway.” He’ll just do what he can do and recover at the rate his body allows.

“I’m pretty calm and accepting about it, which is not a normal attribute for me.”

He’ll have spinal surgery in November to address the nerve issue: “an ‘interior cervical discectomy fusion with absorbable plating,’” he said.

He’s optimistic the procedure will snuff out the fireworks in his arm and turn him loose to truly begin recovering his strength. Even if the surgery is a smashing success, he knows his recovery will be slow—and that it’ll feature a numbingly long string of basement miles.

That prospect may frighten Marchand’s basement more than it scares him. “I have about 85,000 miles on my indoor bike—and zero wrecks,” he said. “I’m pretty sure the front wheel doesn’t even turn anymore.”

Marchand had to replace that bike’s handlebars a while back. Corroded by years of sweat and basement damp, the original set “caved under me like a rotten log.” (Please stop and fathom for a shuddering moment the amount of water torture required to break a metal bar.)

He doesn’t use a heart rate monitor, much less a power meter. He’d make an unlikely Zwifter. “I don’t like all those numbers nagging at me,” he said.

Instead, “I have a pile of VHS tapes and a little TV with a built-in VCR.” He pedals along to recordings of old Tour de France stages. “I mostly don’t remember who won. I just follow along and do pseudo-intervals.”

Marchand’s VHS-equipped old-schooledness stands in contrast to his teammates’ techy precision. “To Bob’s credit, he’s been willing to tolerate how I do things.”

Marchand may look at training differently, but he looks at his teammates with nothing but warmth and regard.

“I wonder sometimes what the world sees when they look at us,” Marchand said. “But on the inside, it’s a family. We have a lot of respect for each other, and I’ve loved just hanging out with them. Don’t tell anyone, but I feel like I won the lottery with this team. I think sometimes, ‘How did I get into this?’”

I didn’t have the guts to tell him on the phone, but I look at Panaracer as gravel’s New York Yankees—a team whose success makes them beloved at home and resented elsewhere. And while this Twins fan hopes there’s a dugout full of scorpions waiting for the Yankees in the baseball afterlife, I’m a total Panaracer homer thanks to Nebraskans Marchand and 2019 Gravel Worlds champion John Borstelmann.

It struck me talking with him—here’s a guy with a broken neck telling me how lucky he is. And not in the “It could’ve been so much worse,” sense of luck. Marchand is lucky in the “Would you just look at how I get to live?” way.

“I’m just an old guy from Nebraska doing this for fun,” he said. “I just love riding bikes.”

I asked him how folks have responded after his accident—and why he’s said so little about it publicly before now. “I don’t know,” he said of his radio silence. “You’re not supposed to talk about injuries. You don’t want to encourage them.”

He puts clear parameters on his social media use. “For me, Facebook is for two things. It’s for keeping up on bike stuff—and for wiener dogs,” he said. “That’s it.”

He may have kept mostly quiet about the accident and his recovery. But Marchand said he’s appreciated the support he’s received from gravel riders near and far. Living in Kearney, where one or two buckets of chicken could feed all the avid riders, he said, “I get jealous of the Lincoln scene, sometimes.” But this ordeal has reminded him how connected we all remain to the caring folks across our sport—riders “in Lincoln, in Emporia, in Stillwater” and thousands of other places across the Midwest.

There’s just something motivating and restorative about communities like this, he said. Something that picks people up and helps them heal.

“Those Missouri guys, the Move Up Off-Road guys, Joe (Kleidosty) and Don (Daly) and them—they sent me a nice video, just wishing me well and telling me to heal up quick,” Marchand said. “Carney watched that video. And she said, ‘Well, I can see what you like about this whole crazy thing.’”