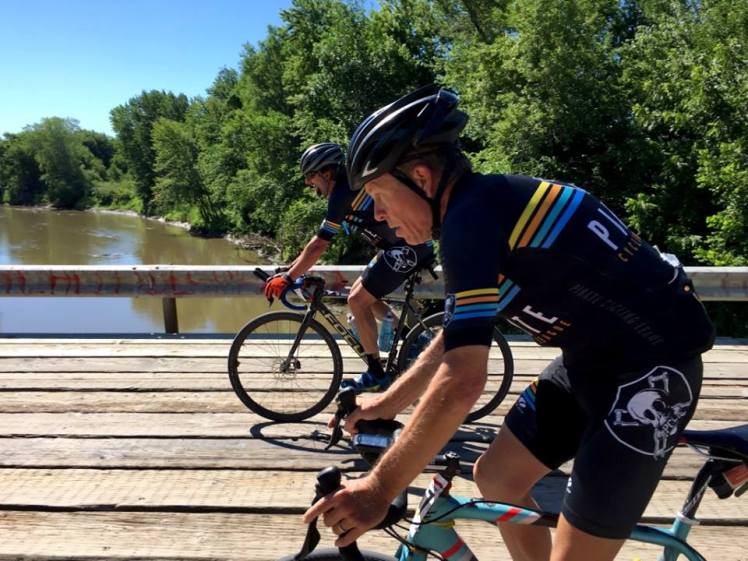 I won’t pretend I knew Randy Gibson better than I did. It’s just that everything I did know about him, I looked up to.

Randy was struck and killed yesterday evening by a drunk driver on Sprague Road southwest of Lincoln, out near Bluestem Lake. Like nearly every other Lincolnite who rides bikes on country roads, I feel his death as a personal loss.

Randy was someone I “Strava-knew” as soon as I started riding gravel in 2014. Everywhere I rode, Strava told me this Randy character had been there many times before, moving a helluva lot faster.

I started pretending this man I’d never met was a nemesis. I’d finish a ride and check the segments to see how I measured up. I’d clench my jaw and say, “Randy…” in that voice Jerry Seinfeld reserved for “Newman…”

But once I did meet him, I quickly realized I couldn’t even pretend to not like him. He was maybe the nicest fast guy in Lancaster County.

Once I followed him on Strava (and looked not just at his trophies, but at his actual riding), I learned he was more dynamic than a simple speed demon. The guy just enjoyed riding gravel—at any speed. Twelve or 21. Didn’t much matter to him. He loved his miles, and would’ve topped 10,000 for 2017 in a few weeks.

He may have enjoyed easy rides, but when he was racing, man, could he go. I remember recovering near him after a pretty crazy century race. I looked up and he’d disappeared. I was too boiled to think much about it. (It wasn’t like he was required to say goodbye to me.) But later he told me a story that probably doubled my respect for him.

That race just plain hurt. But his wife, Christy, was riding it, too. She’d hit the wall and texted she was uncertain she could finish. So Randy got himself back on the bike. If I remember the story correctly, he rode the course backwards nearly 20 miles to connect with her. Then he turned around, and rode it a third time at her side, seeing her through to the finish. That is love and that is grit, together.

My last conversation with Randy was on a group ride. We were talking about that race. I remember he’d attacked our group of 12 or so riders in the hilliest section. Four guys went with him, but the rest of the group blew apart.

Truth is, Randy wasn’t happy about it. He knew where an attack would stick, and he put in several sharp, smart efforts. He’d dug a hole and shoved Marty and me in it. All he wanted was a little help throwing dirt overtop us. He said he turned to the four guys still with him. “I told them, ‘We’ve got numbers. Let’s go,’” Randy said. “And they wouldn’t.”

He shook his head in frustration. He was telling me in so many words: “I wanted to finish you when we had the chance. And I’m mad we didn’t.”

I was struck by the oddness of our conversation. Why was I sympathizing as he described wanting to stick a hayfork in me? Why did I feel like he was kind for telling me this?

I learned of Randy’s death late last night, and I spent the next several hours revisiting this conversation. Sitting in its oddness. I decided I felt kindness because it was kind. It was kind of Randy to tell me this because he trusted I wouldn’t take it personally. It wasn’t about Marty and me. It was about racing. And racing is dear.

I won’t pretend to know Randy inside and out. I was never anywhere but on the periphery of his life. But I learned something in our last conversation. I learned that not racing when you have the chance was maybe one of the few things that rubbed Randy the wrong way.

Life isn’t a race. And Randy could enjoy taking it slow. But for a racer, the circles of how you live and how you race overlap. And Randy rejected half-heartedness in either one.

“I love racing,” he told me on that gravel road. “I love the chess game of it. I love seeing how the decisions unfold.” In anything, you decide with all your heart. And you go.

Randy is survived by Christy and his two kids, Russ and Sofia. I don’t know Sofia. But I know Russ as an incredibly gifted cross racer—a teenager who quietly kicked my tail all fall last year.

Randy was the Gibsons’ sole income as Christy home schools the kids and deals with chronic pain. They have a tough road ahead. Beth and I made a small gift to this fund to help them. I invite you to consider doing what you can.

Decide with all your heart. And go.