Can I just say I love the classiness that drives this sport? Gravel cycling was on its best behavior (per usual) at the Cornhusker State Games on July 28 in Lincoln. And it showed before the riders even hit mile 2 on the 100-mile course.

Our start at Backswing Brewery was delayed maybe 10 minutes as nifty race volunteers worked to accommodate a greater than expected number of folks registering at the start. Yeah, we were champing a bit at the bit to start racing. But once we knew what the holdup was, there was zero grumpiness.

More folks want to join in? Great! Come along! It’s going to be fun. 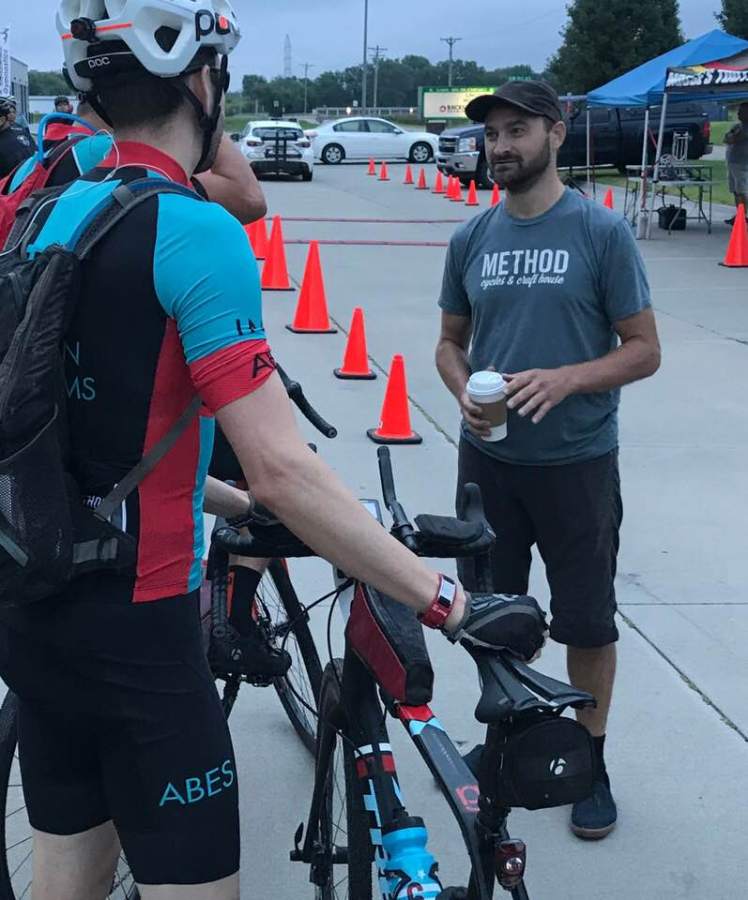 Race director Jason Cyboron drove and paced us out onto South Street for a few blocks of neutral rollout. Then the course turned south onto a soggy Jamaica Trail, where I feared the guns might start blazing straight off.

With the trail wet and narrow and the daylight just a few minutes old, this opening stretch had me nervous. Take 100-ish antsy southbound racers and who knows how many early morning dog walkers headed toward us unawares, and you’ve got yourself a pretty decent recipe for heck. 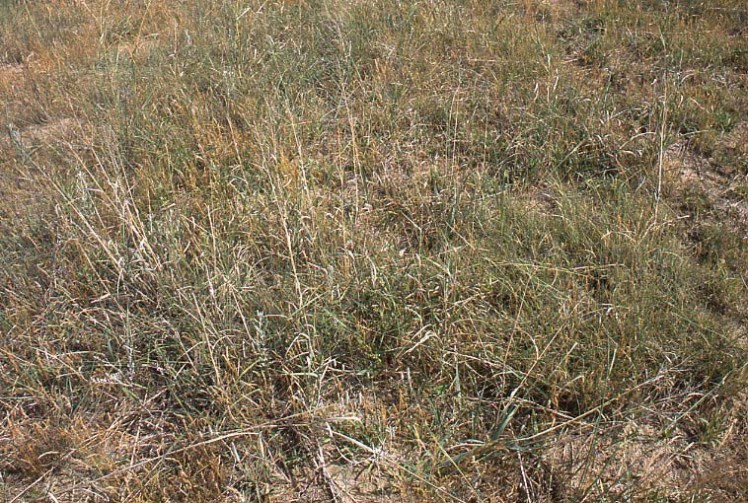 I feared we were one groggy jogger away from my least favorite game ever: Find Your Teeth in the Grass. They’re in there somewhere…

I’ve listened to enough Phil Liggett and Paul Sherwen to know the safest place to be when a racecourse gets coarse is at the front. And I was reluctantly prepared to dash for it if I felt unsafe where I was. Fortunately, there was no need to worry. The good folks at Panaracer/Stan’s NoTubes, Mike Marchand and Bob Cummings, took the front and rode shoulder-to-shoulder, then drew the pace down-down-down. 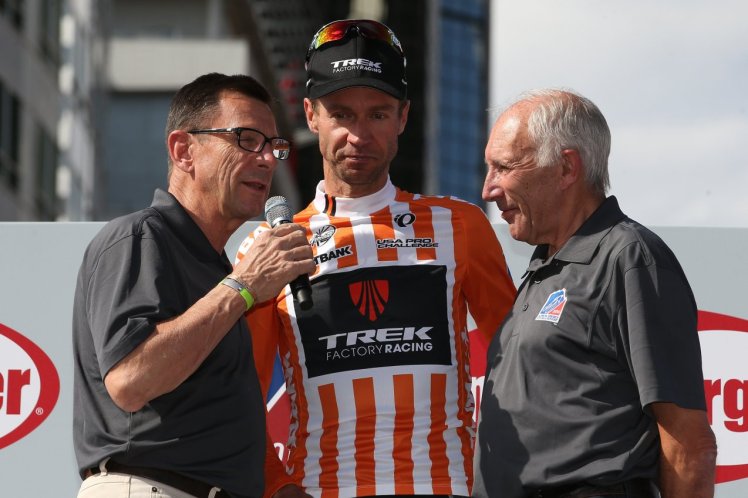 Their message could not have been clearer: There will be no racing here. We’ll make our way through these bogs and these dogs at a gentlemanly pace, then fire it up once we get free on 38th. The end result was my first-ever 12-mile neutral rollout. But it was a safe and classy move, and I very much enjoyed this ride within a race.

Of course, things went boom once we hit 38th. And a whole lot of pent up energy got spent in a fun, racing hurry. The lead pack went from 40-ish to a dozen-ish in two hills, and I had to bridge to make the cut.

Panaracer and Nebraska Medicine thrashed about for a while, and five Abrahams popped to two with Steve Morin and me hanging on. A few more gasps and we were down to folks I knew by name.

Nebraska Medicine had the always-aggressive Josh Shear (by now an enduring character in these endurance race summaries) and his teammate, Brian Johnson. I was excited to race with Brian. Jason Brummels had told me months ago at Method about all the work Brian had put in over the winter, and I’d heard about a win he took this spring down in Kansas. But this was my first in-person look in 2018. And I can attest: Brian looked serenely fit. Like, you watched him pedal and your mind just automatically added that sword sound. 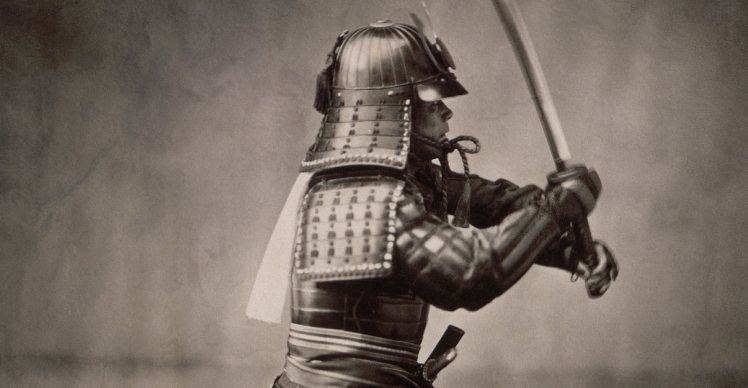 Up there with Nebraska Medicine was Panaracer’s Mike Marchand, unfazed by the scraping he took in a crash the previous weekend at the kinda bloody second running of the Bohemian Sto Mil. Fellow master-named-Mike was Edge Physical Therapy’s Dr. Mike Bartels. This guy was one missed turn away from winning this race last year, so I wasn’t about to misunderestimate him again.

There was Steve, the Lincoln Abrahams’ human motorcycle. And there was … me, your humble narrator for this evening. Let’s get to it!

I thought I might see my vivacious children wagging cowbells here, but no such luck. Nor did I see Josh attack the feed zone, but he sure the heck did. He got his pipe-cleaner proof of checkpoint attendance, skipped the water cooler, and dashed off without my noticing. He was already an apostrophe on the horizon before I even realized what was up.

With that cheeky move, our six-man lead group became a five-man chase—and a peculiar one at that, because we featured Josh’s teammate, Brian.

At CSG last year, I’d found myself in a similar spot with a teammate up the road. Marty Killeen had put himself in one firecracker of a three-man break with Josh and Randy Gibson. And I had to decide: Set aside my own ambition and let Marty duke it out for the win? Or chase them down and possibly decrease Marty’s odds by bringing more competitors with me.

I’m not proud, but I chased. I chased like hell and pulled all sorts of calamity along with me. 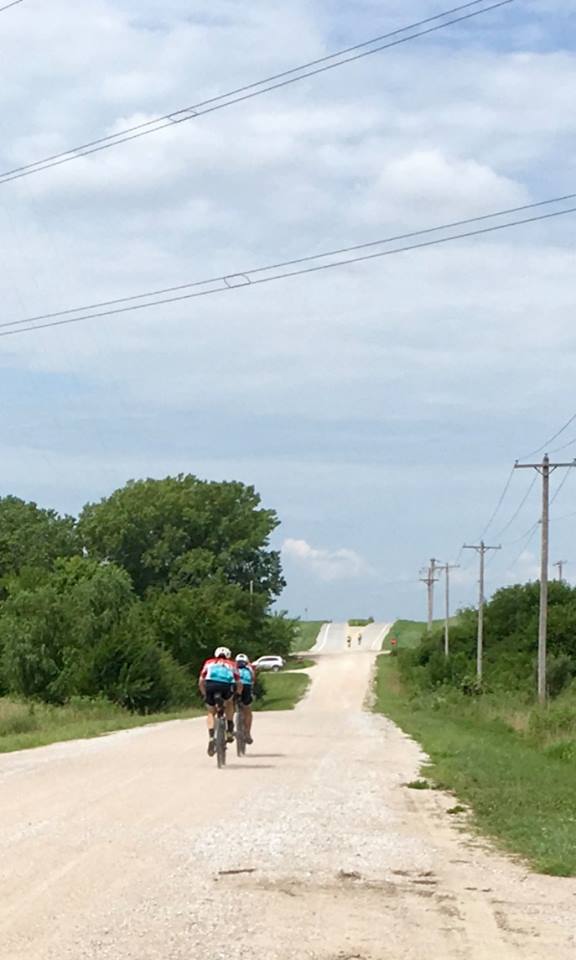 Marty and me last year, chasing down calamity.

Brian was a better teammate. He hung onto our group and did nothing unsporting to check our pursuit. We were free to catch Josh if we could. Brian would even take his turn at the front, but he wouldn’t allow his shifts to gain any ground on his teammate. I understood and respected his approach.

I also feared the matches he was saving by generally hanging back. If and when we caught Josh, Brian would be in great position to spend those savings in an attack of his own.

Steve took several savage stabs at the front—shifts so vigorous that they put Mike Bartels and me on the ropes. At one point, Dr. Bartels rode alongside me shaking his head. “I can only imagine what your training rides are like with that guy,” he said.

I nodded. “It’s been a brutal spring.”

A handful of miles later, I was on the back when Bartels lost the wheel in front of him. A little gap emerged, and I came around to pull him back on. (We needed all hands on deck to chase.) But he didn’t stick. And we were four. Or rather, three, considering Brian’s position.

Still … (I apologize if this sounds braggy. I don’t mean it to.) Mike Marchand, Steve Morin and I working together—that’s a fairly powerful trio right there. And that’s more than enough to run down your typical solo breakaway over the span of 40 miles. And we were just. Barely. Doing it.

The gap was coming down, but at heavy cost.

On one of my pulls, I saw Josh relent a little. OK, the catch is going to happen. I pulled off to the back and set out to recover for two possibilities. Brian could attack at the catch. Or maybe Marchand or Steve would dial it up to try to deny Josh a spot on our train. In either case, I really needed my heart rate to dip under a boil.

We caught him at mile 80, near my little purple childhood’s Big Blue River. We crossed a plank bridge, the road pitched up the other side of the river valley and I discovered I had nothing left. The climbs at miles 80 and 84 were the severest of the race, and they caught me in a big, fat spot of bother. And I sprung.

I’m upset about it—not because I believe I’d have won in a sprint over those killers. And not because it put me just off the men’s open podium in fourth. It was upsetting because it meant I missed the best part of the story. I’d come all this way only to find chapters 9 and 10 ripped out of the book.

How would it unfold with the Nebraska Medicine pair vs. a de facto Panaracer/Abraham alliance? I couldn’t stay close enough to watch.

There were a hundred stories playing out all over the course just then. And I know the front has no monopoly on the good ones. But when I popped off, every single one of those stories felt far off my front or far off my back. And my race ended that way, in limbo. Stuck in the book’s gutter, or on some blank chapter break. And I felt the loss. 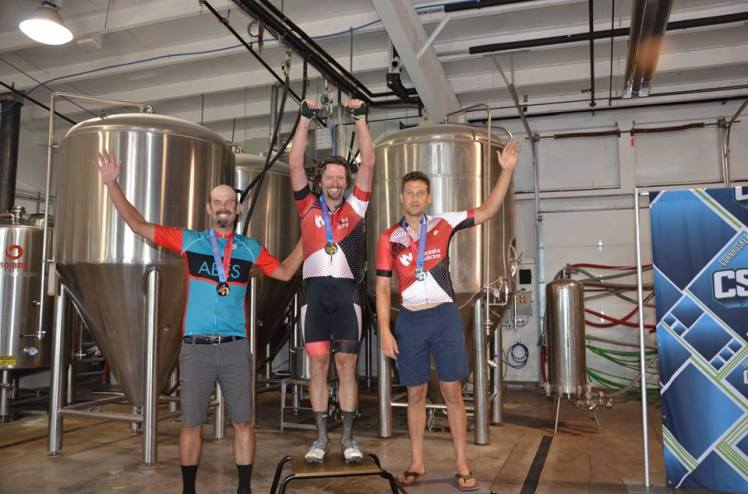 So how did it turn out? Well, Josh was just on fire. His ability to attack again and again after 40 isolated miles is just tremendous. A great win. (Photo, Cornhusker State Games)

Brian proved something big in this race, both about his fitness and his strength as a teammate.

And Steve’s shifts at the front through the entire chase were legendary. The lion’s share of the chase’s watts came from those two legs on the left. 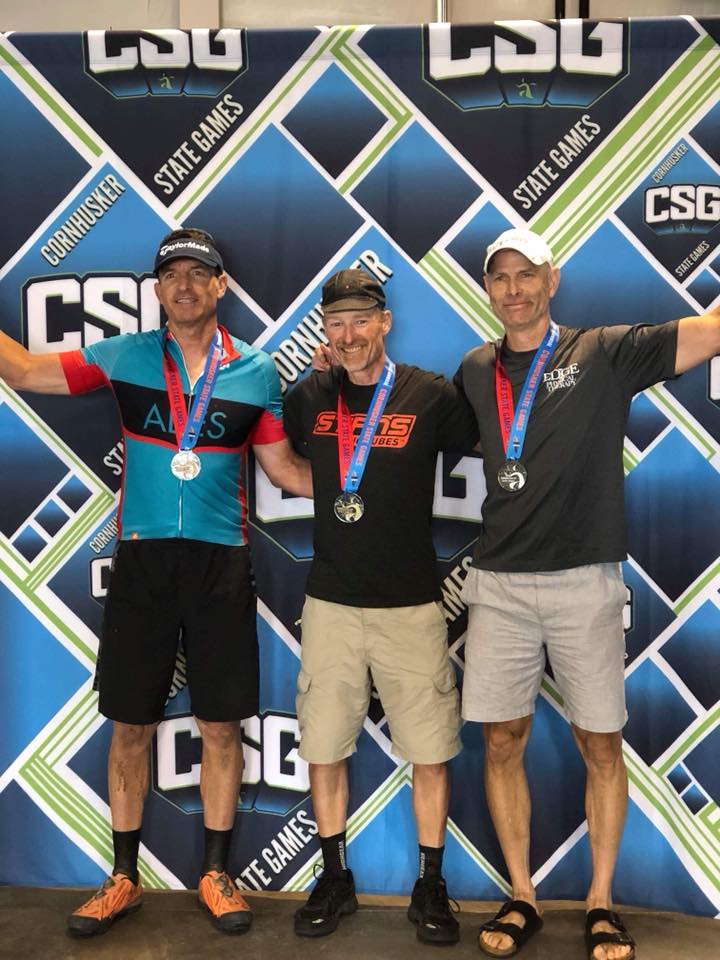 Mr. Tony Black (left) notched himself another master’s podium. And what can I say about Mike Marchand in the middle? Once Bartels (right) fell off, Marchand’s masters win was in the bag. He didn’t have to add to the chase. But he did. Because he is start-to-finish classy. And not every racer can say that. (Photo, Cornhusker State Games)