Two days before the Cornhusker State Games gravel grinder, I woke on my left side with a start. A fifty-cent piece had somehow wedged itself against the back of my mouth, its grooved edge scratching. My startled consciousness fired off practical questions.

How the hell did a coin get back there?

And how could I get it out?

I sent the purple seal that is my tongue on a reconnaissance mission. (Sir, yes, sir!) The report came back quickly.

It was no coin. The culprit was instead a mutinous left tonsil, suddenly in a rage, somehow doubled in size, and pocked with nastiness. I rolled onto my back and received word from the nearest ear. It, too, was deeply unhappy, and was considering seceding from the union of my once-peaceful head.

There was rioting all down the left side of my throat. Little shops, once quaint with awnings, burned to nothing. I tried to swallow and was told to go to hell.

My race … I whispered at the ceiling fan. At my sleeping wife. At myself. My race!

Turns out both my daughters were fighting similar civil wars. We trudged to our different doctors that afternoon and received identical diagnoses in lockstep: Strep. Strep. Strep.

I told my doctor I was set to race on Saturday. He smiled in sympathy. Amoxicillin works fast, he said. It’s not impossible…

I took that good news and didn’t elaborate on what I meant by “race.” This was no 200-meter dash. I was set to race the Cornhusker State Games’ 100-mile gravel grinder in Roca—an unforgiving little race where placing well requires shoving your heart up around 160 bpm and leaving it there for the better part of six hours. 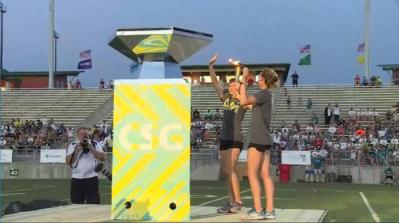 Lighting the CSG torch this year were the seven-time NCAA III champions Elizabeth and Kaylee Jones. Their coach is a pretty nifty guy I know. (Photos, left to right, 10-11 News, Nebraska Wesleyan University)

I got second in this race once, and something like fifth last year. If all went well, I thought maybe I could sneak my way back onto the podium this time. But all was not well.

I’m third base coach for my son’s Junior Saltdogs team, the (intermittently) mighty Burros. Fever or no fever, I had three games to coach on Thursday and Friday. I did my dizzy best to jog out there and remember the outs. And Marcus and his teammates outdid themselves, posting upsets to advance to the championship final on Friday, where they fell by one run in extra innings.

Coaching sick is one thing. Rising to the occasion hinged on my remaining able to count to three, wave baserunners around and do the whole ear-tugging shoulder-tapping signal routine. But racing sick is another animal. And I needed more time on the couch before I could put my legs and lungs and heart through that punishment.

I texted my teammate, the newlywed Steve Morin, and let him know I was out. An injured Tony Black couldn’t compete either. It’s OK. Steve raced extremely well on his own and finished second behind the defending champion, a stronger-than-ever Josh Shear.

I didn’t mope too much about not racing. (It would’ve been a train wreck.) But I did miss a lot of the little things that go into toeing the line. I missed waking up with that electric purpose of race day—my body firing up like a new lawnmower on the first pull. I missed gathering my stuff, wondering what I’d forgotten, and knowing I’d forgotten nothing. I missed pulling on that impossibly thin race jersey, feeling like a dang superhero. The click and zip of the boa dials on filthy shoes. I missed seeing teammates and friends—this peculiar gravel family. I missed all the ridiculously positive self-talk I use to muster the gumption to try and hang onto a group that’ll go faster than I ever could alone. I missed the race director talk, the happy rollout, then that splash of tires moving from pavement to grit.

It was such a pleasant feeling, all of this missing. Because it reminded me how precious racing is—how precious any beloved thing in our lives truly is. We’re lucky to live with purpose—even a purpose as silly as this: A bicycle. Sun over grass. Some friends. Cattle and beans and creek beds and dirt. And a road that bends back to a tavern in Roca.

I’ll race you there, friend. Winner gets a beer. Loser, too. Those are the stakes if you’ll have them. OK? Let’s race.

One thought on “The Unracer: Go inside the mind of someone outside the race.”