Abes are all smiles before the start.

My orders for the Cornhusker State Games’ 104-mile gravel grinder were to set up Iron Man Eric Vacek to go for the “Dirt Rouleur Award.” That’s CSG’s tip-of-the-cap for the cyclist with the fastest combined time between the cat 1 mountain bike race on one weekend and the gold gravel grinder the next.

Vacek was the only Abraham in both events. And he was third after the first race.

My plan was to stick with Vacek like stink on fish. Minimize his work. Then help him move to first without burning all his matches.

If I did my job right, my little teapot would probably boil dry around mile 75. And I’d get to watch Vacek pedal off toward glory as my vision fizzled into the purple blotches of a nice meltdown.

But I didn’t do my job right. Plan A fell sideways. And I spent the rest of the morning improvising.

All five Abes clicked through the first third working together toward the front. A solo break got loose at mile 3, and the pack shared the work of keeping him in sight.

I was chewing rice rolls at the back of our group when Tony Black rolled next to me. Tony owns more of my respect than will fit in a modest home. When he talks, I listen good. We were approaching Highway 77, he told me, and I didn’t want to be lounging back here when we arrived. “It’ll split.”

Our pace line bowed up then for a no-risk left turn. I heeded Tony’s advice, took the corner tight and went from 14th to about third in a few strokes. Soon, I saw 77, and the double-trailer semi ready to split us in two. Maybe five of us had time to cross safely. Nine or so didn’t.

It felt like getting out of homework watching the rest of the class labor to rejoin. And we entered checkpoint 1 as a big, winded family of 14. 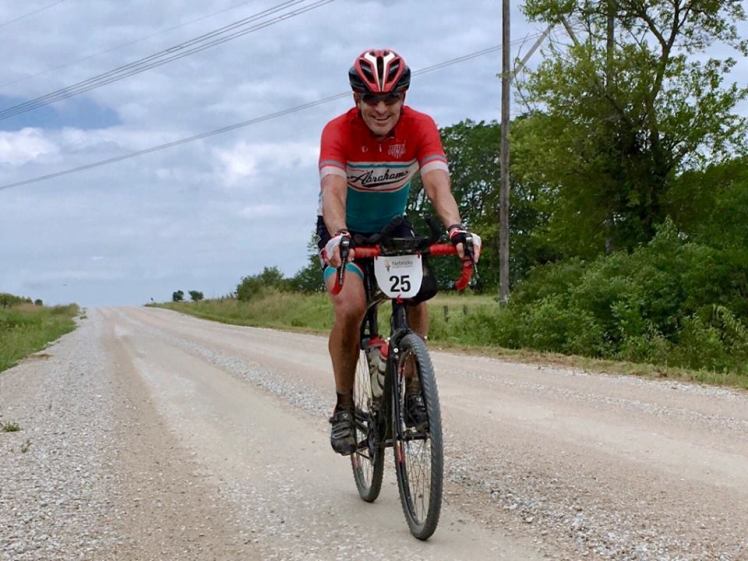 Tony Black can predict the future.

We lost our guy

That’s when Plan A tipped over. See, 14 guys can roll into a checkpoint together. But unless there are 14 coolers, they can’t roll out together. I filled one bottle and wolfed a pickle before I saw the sideburns of marked rider #1 and a few others scurrying out.

“Oh, no you don’t, Lamb Chops.” I hustled after the 2014 Gravel Worlds fat bike champion and general big deal: Matt Gersib. Teammate Marty was up the road with a few guys, and a sleeker chase group formed with both our Rouleur rivals. I moved on it.

After eight Mississippis, I looked back, hoping to see a string of Abraham jerseys. I saw nothing. No Tony. No Mike. No Vacek.

I did what I do when plans tank. I whined. “Martin! We lost our guy!”

Still, we were where we needed to be. Rivals Brian and Matt were here. And Marty and I had a perfect excuse to not pull. If the others wanted to catch the breakaway, fine. But until further notice, we’d sit at the back.

I swung between enjoying this free ride and worrying about Vacek. (Did he flat? Bonk? Wreck?) We turned onto Spring Road and entered a hilly section I knew well. And I realized Vacek’s odds of bridging were about to take a serious kick in the pills.

I told Marty, “Watch Randy.” Randy Gibson weighs six or seven rabbits and may or may not have received the first successful gazelle-to-human lung transplant. He was the strongest guy at the Solstice 100. Marty and I had spent miles doing no work. And an entire Papillion-based team had probably done less than their share. We entered the race’s toughest hills, and Randy would make his displeasure known.

He pushed and the green Papillion team responded. But I wanted no part of it. Marty and I let them go. Gersib kept his cadence mellower still, and soon we had a Rouleur rival in front and behind. Our odds of seeing Vacek slipped lower each minute.

I turned my attention from the Dirt Rouleur Award to the Papillion team in front of us. They were a mystery to me. They had to be strong. But they hadn’t animated the race. They seemed to say nothing, yet answered everything. Half of them qualified as what our wives have begun calling “grizzled warriors”—these old, fit, relentless characters that gravel racing draws by the busload.

We cleared the last hill and began reeling them back. The course turned along the Big Blue. I asked Marty if we should hurry up and finish the catch. He said he wasn’t worried. We caught them soon enough. Josh’s breakaway was just wrapping up, too, and our chase group became the lead group. 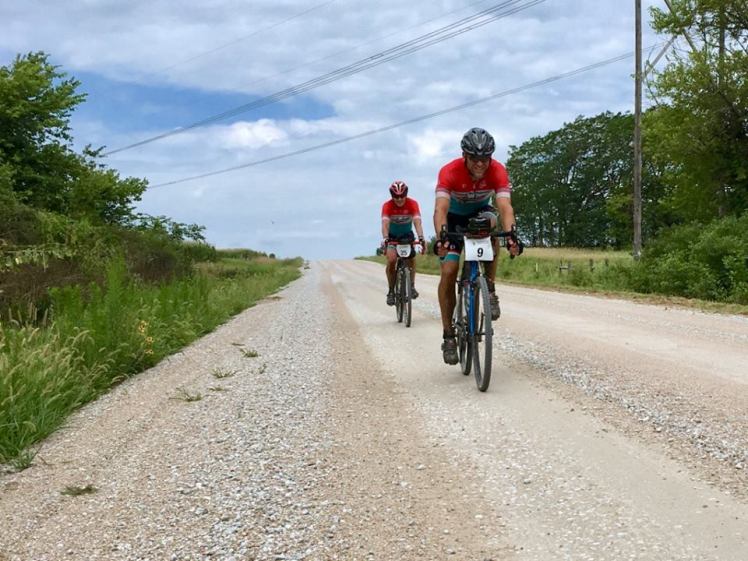 We didn’t know it, but leg cramps hit Vacek so hard, he fell of his bike and “made dirt angels on the road.” Being Vacek, he got up and finished anyway. Nails.

The Abes planned to blow checkpoint 2 at log-in, but I’d only taken on one bottle earlier, and needed to reload. That put me in the same damn predicament from before: I was stuck in line at the slowest water spigot in racing. And Rouleur Brian was filling his entire CamelBak … with … dribbling … water. A split was inevitable.

The leaders were now just Marty (yay!), Josh (uh-oh) and Randy (oh Lord). Well behind them were Brian and the green guys. And back here with me were my darkest thoughts. My gap was about a kilometer.

Getting back up there entailed physical and moral costs. I couldn’t do it alone. But bringing people with me would hurt Marty’s odds. It would be smartest to just sit behind the green group. Go ahead and bridge to Marty. Just don’t ask for my help.

But here’s the thing. I didn’t think these guys could get there on their own. And if I kept hemming and hawing, I’d lose my chance, too. I paraphrased Huck Finn. “Fine then. I’ll ride to hell.”

I swung in front of the green guys and pulled hard, putting in heavy work onto County Road BB. I eventually swung left to let the next man up. But he swerved with me and stayed on my wheel. Cute.

I remembered it was Papillion that gave Nebraska Bill Kintner. Maybe I shouldn’t expect more. “If we’re going to see those three again,” I said, “we need to work together.” After some nods, they agreed to chase. 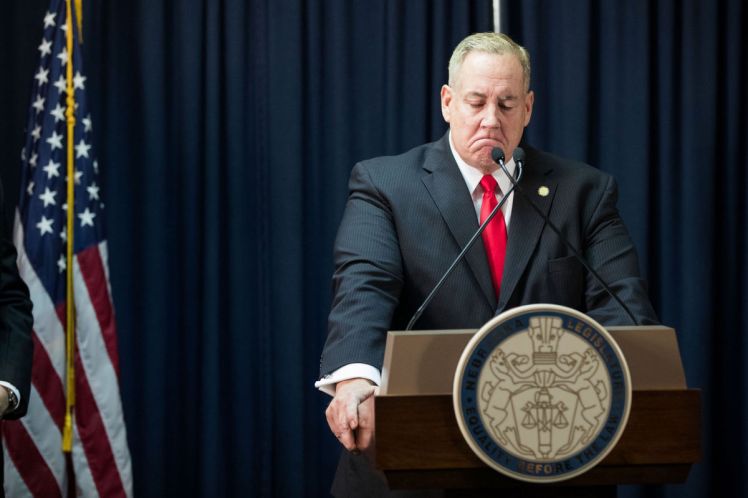 We turned south and worked in earnest down a six-mile stretch. Everyone took their shift, but the bulk of the urgency was mine. We finished the bridge early on County Road H, about nine miles after the split. I was gassed, but not irreparably damaged.

I hid behind Marty, grateful for the friendly wheel, and set about recovering. And the green team paused, then simply pedaled away. The team I’d pegged as weak, unanimated, maybe even a little lost, just dropped the four of us at mile 66.

It wasn’t swift. Just inexorable—as if an astronaut let go of a wrench, turned her head, and found it again, just beyond her glove. They were right there. They were also as reachable as the moon.

Roughly then, Josh paid for his breakaway. He faltered, cramped and was gone. In another mile, Randy cracked. That left Marty and me alone with my mistake. Had I not delivered this green menace, Marty would be alone off the front. Instead, he was off the podium, riding with the “friend” who’d practically shoved him off it.

Checkpoint 3 was coming. Then I had 34 miles to make it right. No lines. Get what you need. Then shut up and race. I’d delivered the green team to Marty. I could deliver Marty to the green team, too.

We took turns in all things, passing strength and weakness back and forth like bottles. We’d bring them within eyeshot. Then I’d cramp and we’d relent.

Beth and the kids were at the last stop in Roca. The gap, Beth said, was just 39 seconds. We filled bottles and ran. How could we not see them yet?

The good news: We couldn’t see the three in front of us because they were behind us, thanks to a wrong turn in Roca.

The bad news: We discovered this only when they flew past us again. Teetering on leg cramps, I could only hold speed and watch all three go. A couple hundred yards bought, just like that. Goodness gracious, did I ever underestimate those guys.

The sprint withered their youngest man, and he found himself alone between the pairs. I gulped water to stave cramps and buy future speed. Before long, we were gaining on the guy in no-man’s land. But the older pair stayed strong.

We reached the isolated rider just as we approached a treacherously rutted dirt stretch. Marty glanced back and pointed low at the man’s kidneys—his signal to dispatch this guy quick here in the rough stuff. I trusted Marty’s line across that moonscape, and our move stuck. Marty was back in podium position!

I began to overheat. It came as misplaced chilliness and a tingling face. But my legs weren’t cramping and we began drawing in the leaders faster as the odometer ticked above 100. I resigned myself to a sprint finish and tried to do more than half the work so Marty might arrive with one more good push left.

We hit pavement, then neighborhood. The gap winnowed to 20 yards. They slowed to turn, and I knew two things for certain. I would corner harder. And I’d deliver Marty to their wheel. He’d be set to win in the closing blocks of a 104.5-mile race.

Then Marty whispered something I’d never have predicted. “Wait,” he said.

Wait? Now? It would have been no less absurd if he’d suggested we get ice cream. What are you talking about, wait?

Sure enough, the race leaders were bowing up to turn right. They bit right and we dove left, running like we stole something, careening through bends and screaming for home. A man on a commercial mower rumbled through an intersection, oblivious to my shouts through his ear protection. “HEADS UP! HEADS UP!”

I veered to avoid being literally mowed down short of the line, smashed my pedals and caught sight of Zip-Line Brewery’s finish line. I sat up and tried to zip up my jersey to look presentable. I spotted my kids and lost it. Marty rolled across first. And the greatest thing about being second was this: Absolutely nothing stood between me and what my best friend just did. 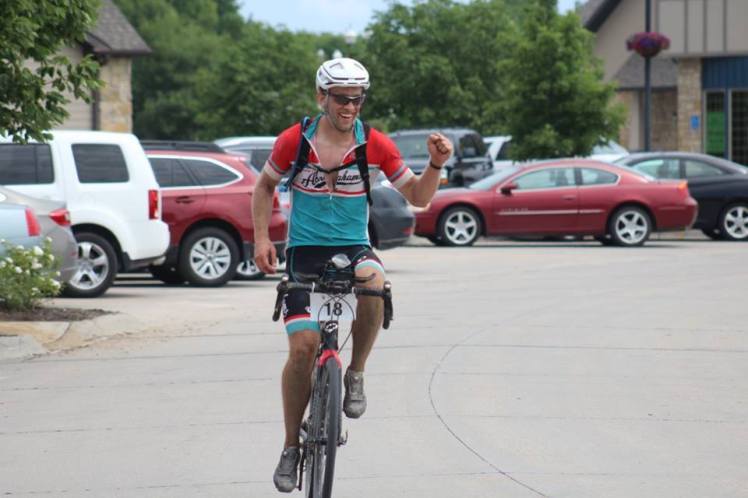 The good doctor and his goon.

6 thoughts on “Not the Plan”