I drove my dad to Minneapolis last fall. My younger brother had bought a new house, and we were coming (ostensibly) to help him move. My dad could barely walk at this point; such was his arthritis and back and nerve trouble. The scooter bouncing along on the back of the pickup was a clue as to just how helpful he and I would be with this move. But my brother had a new house, and my dad should see it. 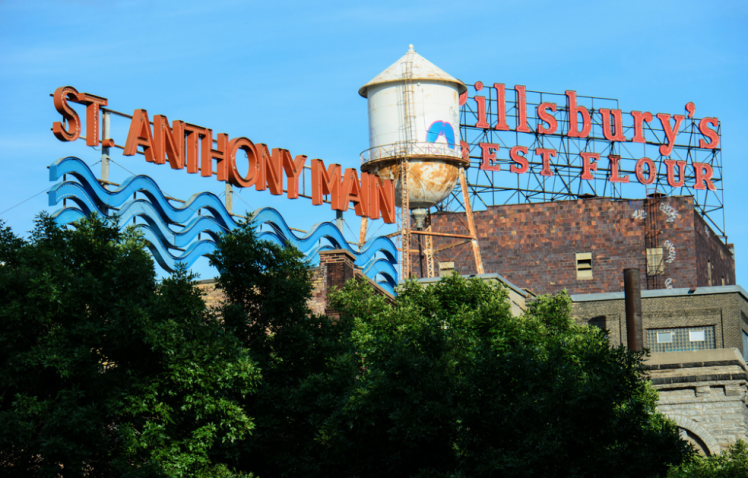 So we packed all the paraphernalia of my dad’s grasp on independence—the scooter and walker and medications and bandages for skin made delicate by years of prednisone—and we rolled out, my mom and older brother in a second car.

Dad brought a bag of candy so we could chew and talk. We gabbed happily and filled the cab with wrappers. To humor my preoccupations, he asked about bike races. Over the two or three years I’ve raced, my dad had gone from someone who hardly realized adults rode bicycles to an earnest fan who wanted to hear “the long version” of each event I entered.

My racing season was done, so he asked about my goals for next year. (I didn’t have any.) So I told him instead about Randy and what kind of guy he was. I said I hadn’t really appreciated how cool it was that Lincoln’s fastest local gravel racer was also one of its nicest. And what intrigued me most about the year of local races to come, I said, would be seeing how the big vacuum he left would fill in.

I told my dad somewhere north of Ames that whoever took that space at the top, I just hoped he or she wouldn’t be a jerk. Nature abhors a vacuum. And if it must be filled, let it be by someone good.

Even if it were physiologically possible, I told my dad that that kind of leap would take a winter’s worth of frozen water bottles and more physical discomfort than I cared to imagine. He shifted inside his own unimaginable discomfort in the passenger seat and took another nap. 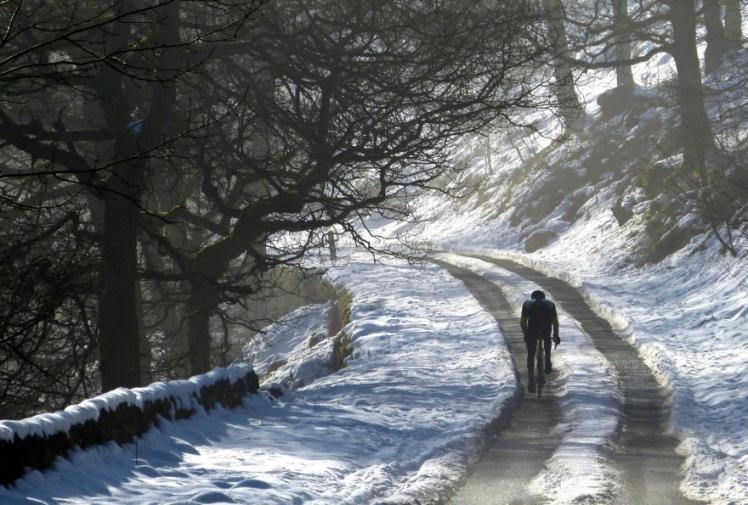 We arrived at the hotel in Northeast Minneapolis and got my dad settled in. Then my mom, brother and I left to go scope out the new house. We saw the front yard’s steep slope—the winding steps that led up to the back from the alley.

She was joking, except not really.

My dad fell in mid-December, in his basement. It happened that I was biking over to see him when he went down. And I putzed around in the garage a while, not knowing, fussing with this or that on the Surly before coming inside. Mom called me downstairs.

Because he’s a dad, complete with a dad’s sense that his 41-year-old son is still and forever somehow a child, my dad told me, “You can’t lift me up.” And I said on three and scooped him up. There was less of him left than I realized. We got him to his chair and Mom cleaned and bandaged his elbow.

There’d be another fall and another scoop, and an early Eisenhauer Christmas, and, the next day, a third, bloodier fall in the basement. This time, a rescue call. The EMTs strapped him on a stretcher, which they had to stand completely upright to make the tight turn at the top of the steps and out through the garage to the ambulance.

He’d never come back home. Surgery on an infected elbow from fall #1. Then weeks defined by a “lack of functional progress.” Then an infected kidney. Then sepsis. Then infective endocarditis. Then death on March 9.

Amongst all that came Christmas Day in one hospital, Sydney’s birthday in another. “It’s going to be spring,” my dad said with an exasperated amazement. Racing season, neither of us said. “I just want to go home.”

So I haven’t done the work. Hardly any of my water bottles froze all winter. And my nutrition has been what I described to my boss as “The Grief Diet.” Others can vie to fill the vacuum atop Lincoln’s lovely gravel scene.

I’ll be concerned instead with the filling of a different personal vacuum. And I am at this moment uncertain whether biking has nothing or everything to do with that filling.

I’m a believer in the power you can draw from riding for someone else. But, for me, that someone else has always been a teammate. In this sense, “riding for so-and-so” is literal. He’s right there. And he’s not out of food and water until you’re both out of food and water. His time exposed to the wind exists in an inverse relationship with your strength. When your strength is high, his exposure is low. You keep him tucked in behind you, hording bullets for the finish.

When someone says, “I ride for off-camera loved-one,” or “I ride for such-and-such a cause,” I have tremendous respect for that. But I’ve never completely understood it. What does pouring yourself into a race accomplish for so-and-so or such-and-such? Maybe it raised some money or some slippery sense of awareness for the chosen cause. And that’s wonderful. But in these cases, the bicycle feels a little beside the point.

Now, with spring here and my father gone, I’m feeling that desire to “ride for him,” whatever that means. And I recognize the ridiculousness of it. I cannot help him. And I know my success or failure on the bike meant roughly zero to him. He enjoyed the stories of my DNFs at least as much as those times I finished well. (In our house, Don Quixote was always more interesting than any triumphant Lance Armstrong. Go out there and fail interestingly. Then tell me about it.) 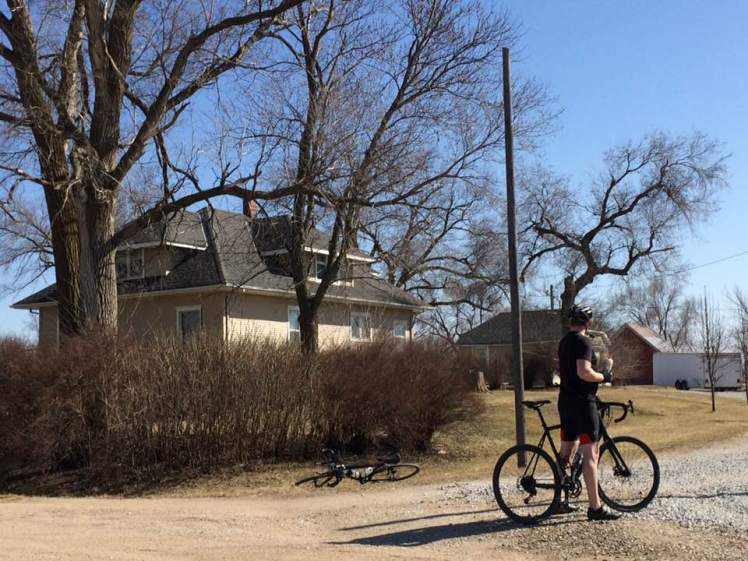 Jeremy and I trekked past the old farmhouse the day after the funeral.

I remember a time several years ago when my folks still lived on the acreage where I grew up outside Milford. I’d biked out to visit them, and my dad had passed me on the highway. When I got home and told him about it, he admitted he never saw me. How can I be any more certain he sees me “riding for him” now? 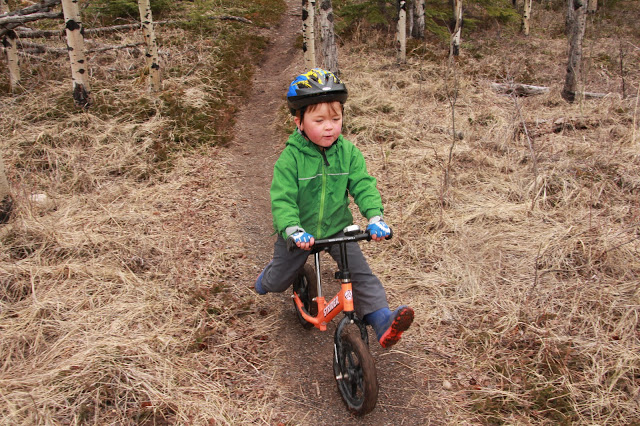 I go back to my teammates, and the way we work for each other. It’s possible to do that work motivated by strategy and a desire to win. But when I’m hollowed out on a hard course, I lose the ability to think strategically. And my desire to win gets choppy. This will sound syrupy as hell, but I don’t care. I’ve learned on my bike that when everything else boils off, my primary motivator—that thing that fills all vacuums for me—is love. Platonic, friendly, enduring, I-won’t-quit love.

My closest friends know this about me. On my third glass of wine, Marty’s wife will look at me, then warn anyone in earshot: “Brace yourselves … Eric’s about to express his undying love for everyone!” And she’s not wrong.

Filled with wine or emptied by racing, it’s the same. A spinning, dizzy, senseless and unstoppable love. “I ride for my dad” is just an expression. But if it’s an expression of that, then who am I to say it’s empty? Who am I to say that can’t be enough to fill a vacuum inside? 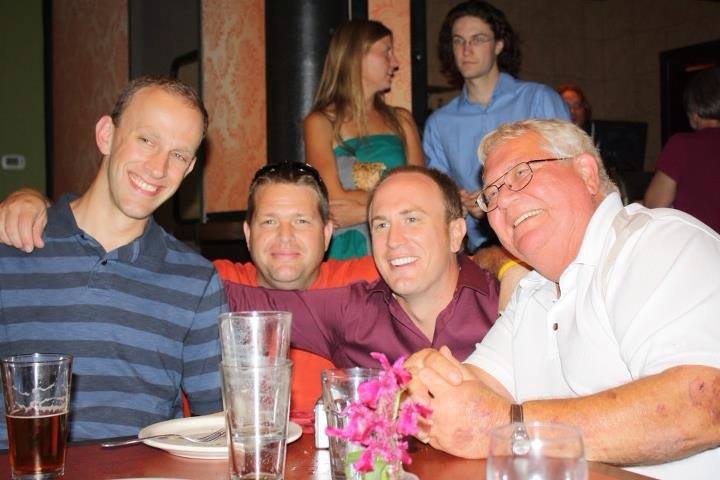