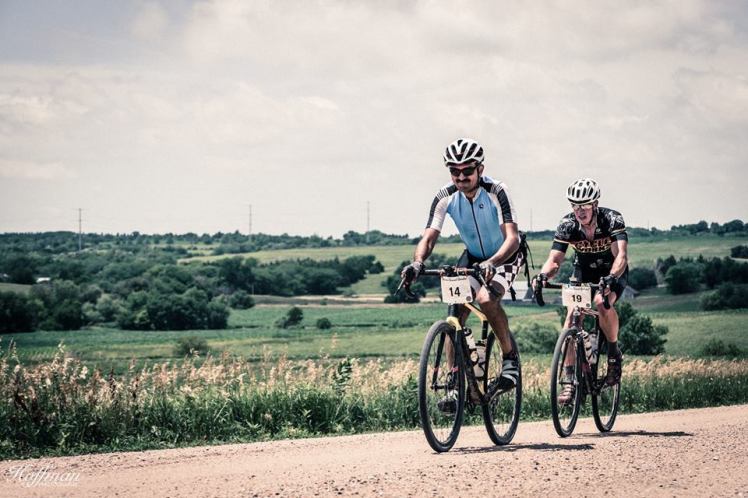 Joe Billesbach’s Solstice 100 debuted in 2017. And in a single year, it’s made the leap from a nice local gravel event into an essential “This Is What We Do” expression of Nebraska’s cycling community.

Most of us are already painfully aware of the bullshit that made this expression of community so needed. Joe launched this race out of Pleasant Dale last year, and Randy Gibson ran away with a convincing win. Within a 10-day span that fall, both Joe and Randy were struck on rides by drunk drivers.

Multiple surgeries and countless hours of PT later, we still have Joe and his bike race. But Randy died on the road, and we’re not the same. 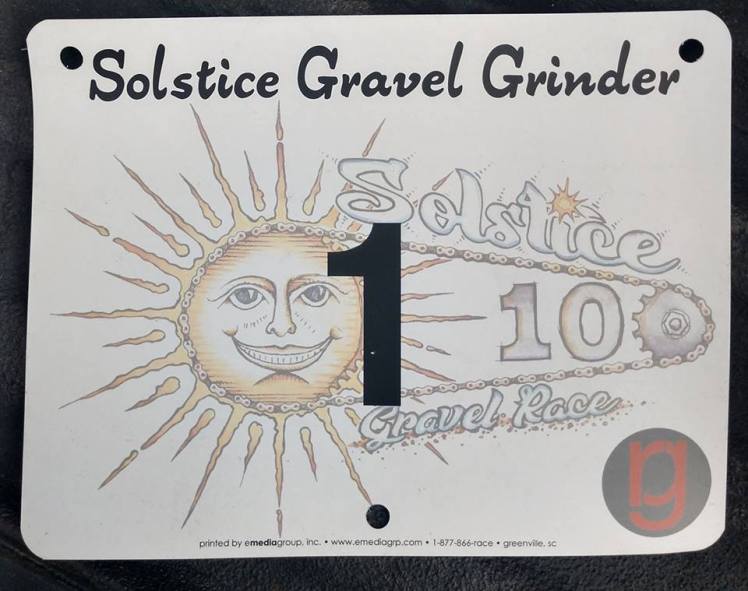 Nobody rode as #1 at the Solstice this year. It’s possible nobody ever will, on account of it’s Randy’s. (Photo, Joe Billesbach)

More than a race, Joe’s Solstice 100 has become our community’s cleanest expression of that Randy-remembering “just ride” way of living. And because of that, it’s also become my favorite day of the year on the bike. 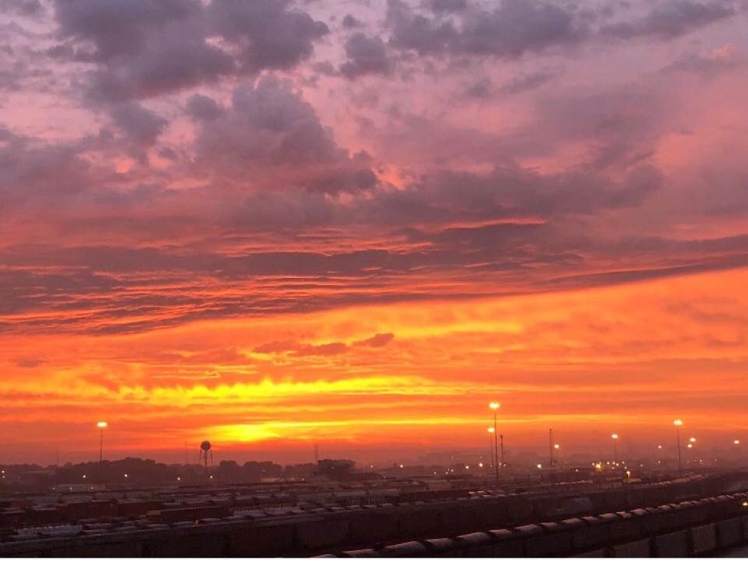 Every Solstice 100 should begin with a sunrise like this. (Photo, Brad Znamenacek)

I spent the hours before this race thinking about Randy and the jarring frailty of strong people. On a race just the previous weekend, Randy’s good friend, the uber-experienced Corey Cornbread Godfrey, found himself in the hospital with heat-related stress to the liver and kidney.

No matter how hard we train, we can break.

Those thoughts led me to my newest teammate, Steve Morin. It’s difficult for me to think of him on the bike as anything other than brutally strong. This would be my first race with him, but he’d been carving up our training rides since winter. I knew he was capable of something special.

Still, look around. We’re all fragile.

So, before the gun, I doubled down on a Solstice-worthy race plan. I decided I’d do whatever I could to protect the strength of our team’s strongest guy. And once I was cooked, Steve could give me a toss and go get after it. 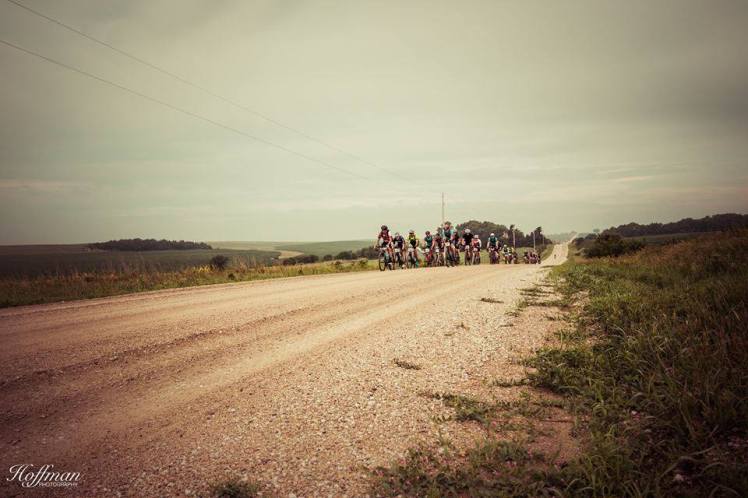 At the tail end of our “chatting phase.” (Photo, Hoffman Photography)

Tony told us days ago to expect the masters division to be stronger than the open men. Masters Robb Finegan and Mike Marchand were his picks to go 1, 2. This pair drove the train from the get-go, and it was clear that the selections would come on their schedule.

We thinned at their slow accelerations. I imagined riders dripping off the back like melt off a shortening icicle. A couple serious slaps from the front and we were down to a half-dozen. I was giddy that Abrahams made up half of this select group. We trucked along through Valparaiso, and I took stock. An alphabetical look at the situation went like this. 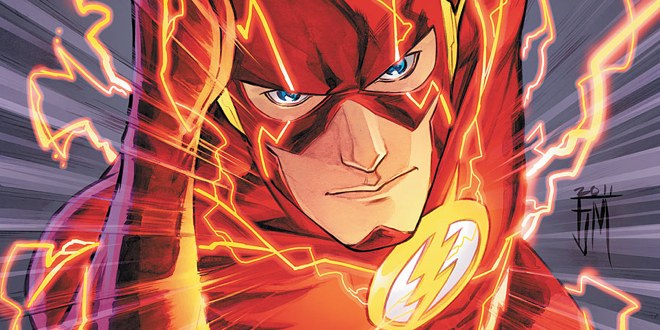 Best of luck keeping up with the Flash and company, Mr. Wendt. (Image, superherohype.com)

Tony bowed out. I damned the torpedoes. And Gen. Finegan fired more.

I remember trying to find the ribbon of draft behind Marchand when Finegan roared off another one. Marchand had been working so hard and deserved a little help. But I had nothing. And a small gap grew like a sore.

“Sorry I’m not pulling my weight,” I gasped at Marchand. (It’s just I’ve got so much weight to pull…) He smiled. He knew how little to expect.

The answer came instead from Josh with his action hero legs. They all bridged back to Finegan behind him, but I floundered. In a couple breaths of self-pity, the gap stretched to maybe 80 yards.

You were select, I moaned to myself. Now you’re selected.

The temptation to bag it at that point is big. But I had one thing going for me—and that was apathy.

Now, as a division competitor, Josh would probably have voted that I go jump in a stock tank. A little shared effort just then would have buried me. But Josh wasn’t driving. And Finegan and Marchand couldn’t give two scoops of ham salad whether I clawed back or not.

If I hustled before they attacked each other again, I could maybe reach somebody’s wheel and grab hold of some rest. So I hunkered down and convinced myself to match them on the climbs and beat them on the descents.

In a while, I was gassed, but back on. Holy crackers, was I proud of myself. But what do you think happened on the next hill? Race fans, Steve got dropped.

Now that surprised me. My teammate hadn’t shown any weakness to that point. I was still red, but I had a decision to make, and snappy. Do I rest on Josh’s wheel and hope Steve bridged back on his own? Or do I fall back and go work for my guy?

I fell back. Steve was the Abes’ best shot to win the open division, or maybe even pass one of the masters if they hit a snag. I coasted until Steve was on my wheel. Then I dug in to reclose the gap I’d just killed myself closing a minute ago. Three or four beats later, Steve blasted past me, cussing about his derailleur. He hadn’t been dropped out of weakness. A bad shift had locked him in too high a gear on the climb, and he needed a few seconds to get it sorted out. What he didn’t need was any help getting back to the leaders.

Only here’s the thing. My matches were pretty dang precious at that point, and here I was, alone off the back. Again.

I set after it another time, but I’d only catch Steve.

The Marchand/Finegan title fight flared up again. Josh went with. And the last two Abrahams got whittled out of the equation. 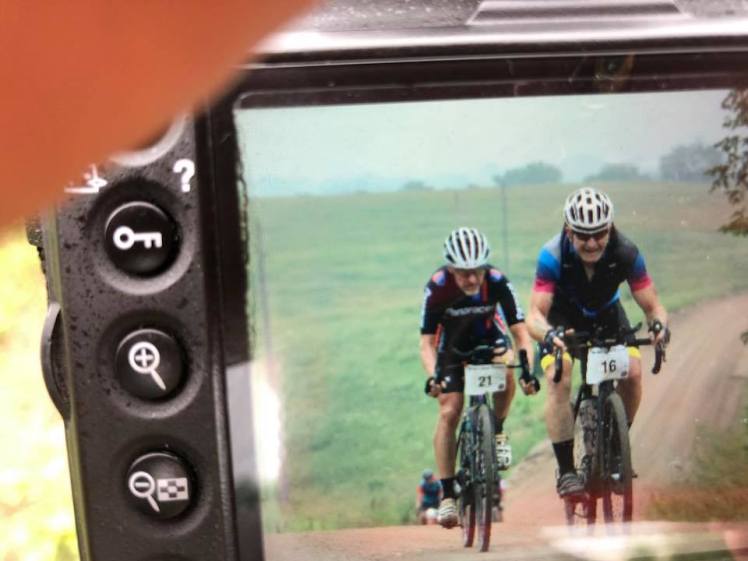 The very picture of masters at work: Marchand, left; Finegan, right. (Photo, On the Virg Photography)

Steve and I watched the action up the road. Two things became clear. Unless a mechanical intervened, we weren’t likely to touch the two masters. And by going with them, Josh had just tossed himself into a pot of hurt.

“Let ’em go,” Steve said. And I nodded, pretending we had a choice.

Soon, all three of them were isolated with Finegan alone off the front, then Marchand, then Josh. Steve and I narrowed our focus to Josh and the men’s open division as Finegan, then Marchand, pedaled beyond our ken.

We wanted to catch Josh, but we’d prefer that he be pretty damn tired when we did. He slowed a little. So did we.

The gravel got deep. It felt like riding over wet mattresses. There were no good lines, and our gap to Josh evaporated.

I was convinced he’d hop on our wheel and we’d be left to duke it out for podium spots. We clicked it up just a couple notches as we met him in the loose stuff. When he didn’t stick, we worked hard for several minutes to be good and sure about it.

With things looking pretty solid in that regard, and with my brain boiling, I told Steve we’d probably spent my usefulness, and maybe it was time he went on. He let me recover some and we worked well together for a few more miles over some difficult roads. But before long, he took his shift, I didn’t quite stick, and he kept going. For a while, the gap between us stuck around 20 or 30 seconds, and I thought, this is foolish. I should still be helping. But then it grew, and it was clear we made the right call.

I was fourth on the road, and had helped set my teammate up for an overall podium and a division win. I had reason to feel good. But my legs and back weren’t convinced. There was a lot of hurting left.

I suffered a fair amount and developed a nasty habit of looking over my shoulder, expecting to see Josh gunning for me. I started to cramp, and on my umpteenth glance back, I saw a human-shaped dash in the distance. I was too shelled to much care. If he caught me, he caught me.

At each successive glance, he got closer.

I turned west on Superior, and my thoughts turned dark.

My father died back in March, and his ashes have sat all spring in a little box on my mom’s bookshelf. We’ll bury him—my dad might actually have preferred the verb, “plant”—in July when my brother can make it back in town.

Joe’s original course skirted within a mile or two of the lovely country cemetery where this planting will occur. And I was relieved I wouldn’t have to pass it directly. (High exertion has the tendency to fray my emotions. My love sloshes painfully and every which way.) Well, I didn’t realize until we turned onto Superior that the rain-revised course would in fact take us right by it and the shell of a church it touches.

And, what do you know? Josh Shear was going to pass me at the precise moment I passed Dad’s pending graveyard. Keep it together, Wendt. Shear will get the wrong idea if you’re weeping as he plods by. 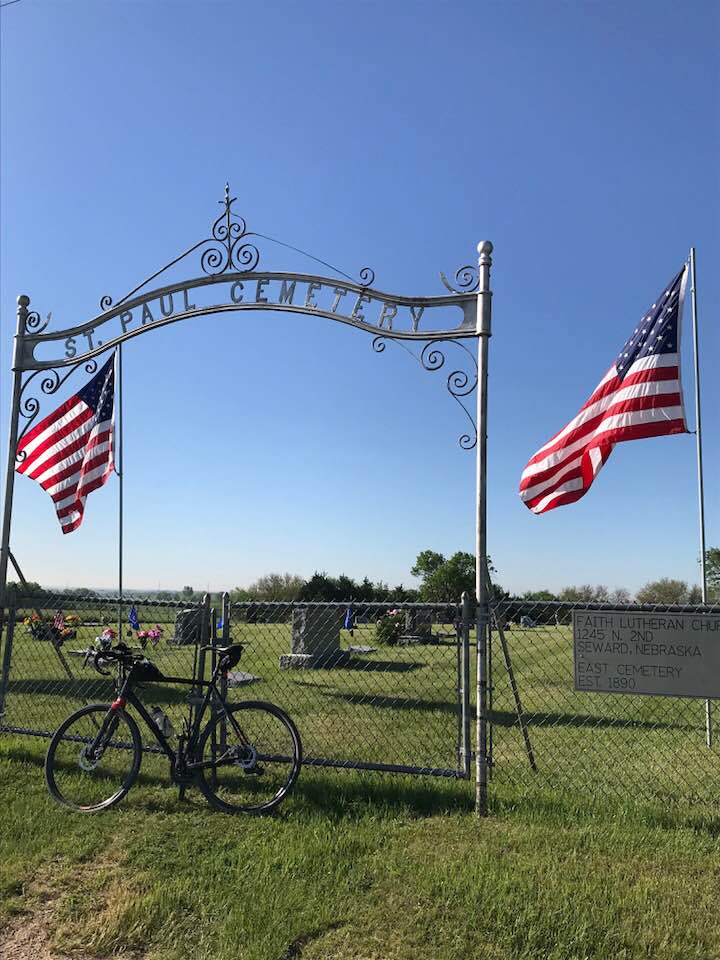 I took these photos on an earlier ride to scout the place out. My dad actually made the sign there on the right. 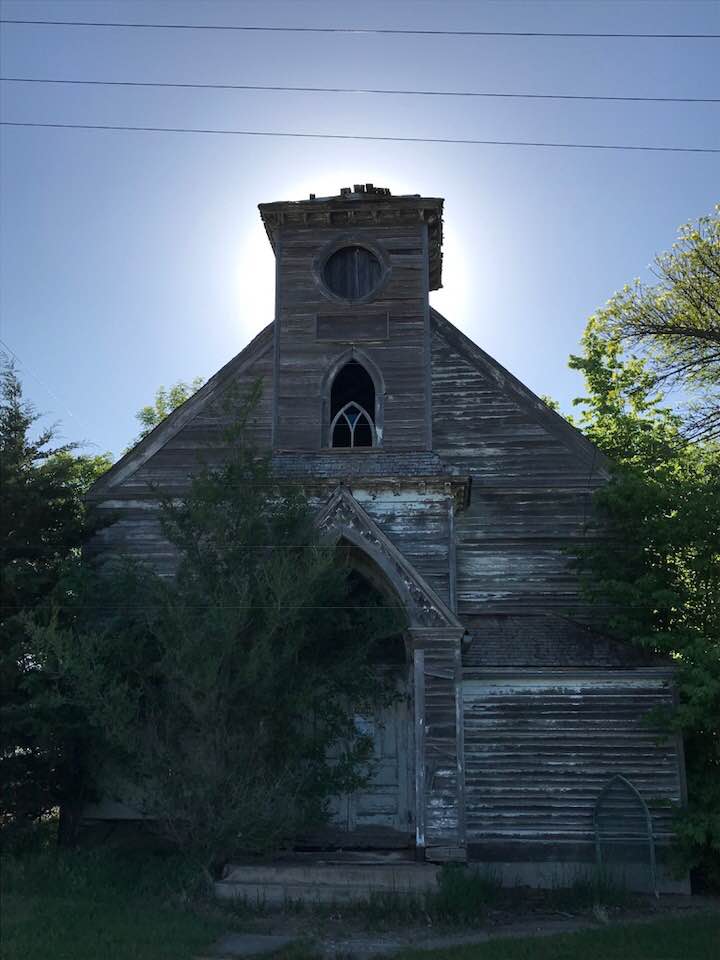 The church is done. But the cemetery behind it hasn’t lost a single customer…

Only, what do you know again? It wasn’t Shear. It was the young phenom, Matt Copeland, tapping by on a gall-darned single speed! I have experience being run down by superior athletes on single speeds, and I have to say I don’t care for it. This kid could do on one gear what I couldn’t with 22. And that sticks in my craw. But hats off to him! He passed me like I was standing still, and I couldn’t respond without cramping up.

And, on the bright side, his single speed status meant I was still second in the men’s open. Score!

I left this shell of a church feeling like the shell of a racer, but perked up as the course turned north for the last few miles back into Malcolm. I knew Joe had cold beer and hot BBQ waiting for us. Even better, so were my lovely wife and vivacious daughter. Here’s the face I made when I saw Sydney hopping around at the finish. 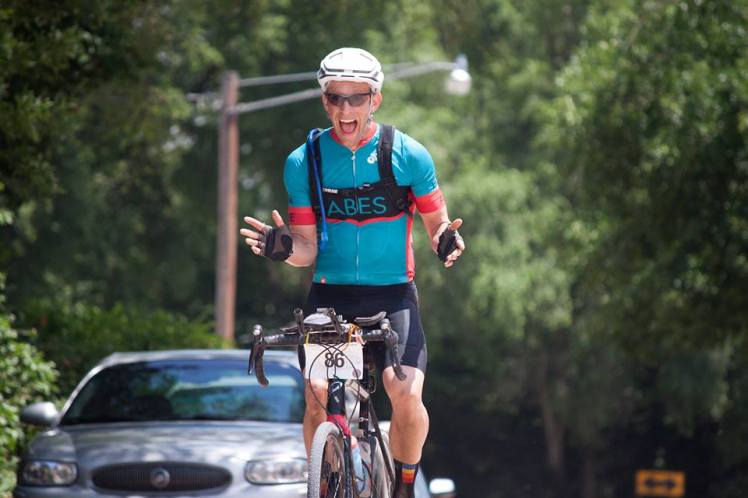 Like I said, in moments of high exertion, my love sloshes around every which way. (Photo, Rob Evans) 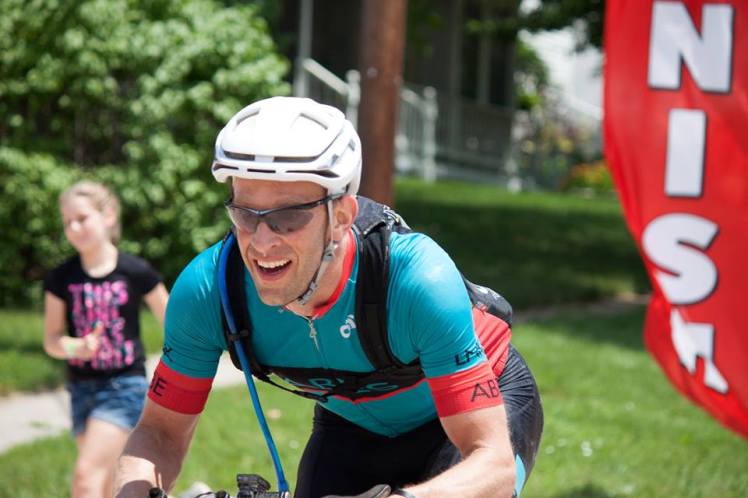 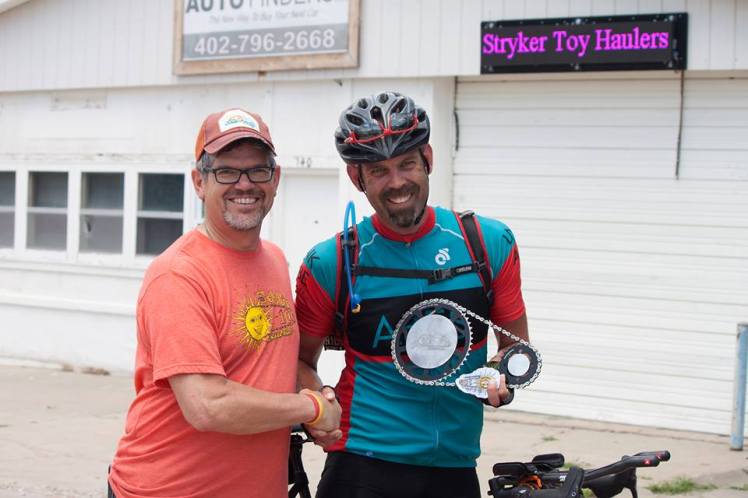 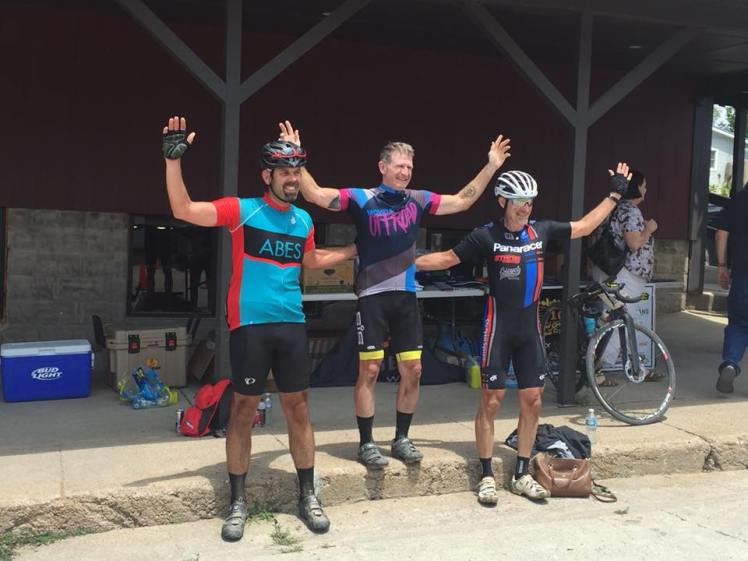