This is a blog about gravel cycling, not politics, thank gosh. But during the second presidential debate, somewhere around the moment when one candidate promised, if elected, to jail the other, I felt a pang that I can only compare to the lowest moments of an endurance race.

This is that dark place. This is suffering. Your wheels are spinning. You’re pretty sure they’re still pointed down. But that voice upstairs is just spewing tar. It’s filling your head. And you just. Want it. All. To stop.

A Trump comparison does cycling no favors. But endurance sports can be similarly awful. Toss-your-bike-in-a-creek-sit-down-in-the-gravel-and-cry awful.

But there’s purpose and beauty and truth underneath cycling’s ugliness. Its suffering has made me a fitter athlete and a better loser. I get beat (a lot), and I’ve learned to admire the grit and ability inside those riders in front of me.

I love group rides even more than racing, maybe because you can let empathy win. When another rider suffers, you’re free to hang back and acknowledge, “This is tough.” You can offer him a gel and a wheel and pull him back to the group. And that feels so good because you’ve ridden with your head full of tar, too. You’ve hung onto someone else’s wheel as if it were Wilson the Volleyball—that one round thing keeping you afloat above the sobs.

Along with fitness and empathy, cycling has given me admiration for the only endurance athlete on that debate stage. You know, the figure Trump threatened to jail, then called the devil, then accused of holding hate in her heart—the unflappable woman supposedly lacking the “stamina” to be president. For all she’s endured in service to country, for as long as I can keep up, I’m with her.

I’ve come to see the best of our politics as about shared endurance. “We shall overcome.” Lincoln laid out our test at Gettysburg, to see whether a nation, conceived in liberty, and dedicated to equality “can long endure.” For me, this debate begged that question. What if we don’t have it in us to throw off this despot? What if, in a battle with the better angels of our nature, tar wins? What then?

I take heart that on the same day of this ugliest debate, two of my teammates were in Kentucky—the state of Lincoln’s birth—showing me a thing or two about American endurance. That morning, Mike Suing and Eric Vacek swam 2.4 miles. They got on their bikes and rode 112 more. Then they ran a full marathon. They crossed the finish as Ironmen in Louisville, in plenty of time to shower, eat and catch the debate if they wanted.

I hope they missed it. It was too beautiful a day.

But if Mike and Eric can withstand all that—juggling training with their demands as a nurse, a teacher, as husbands, fathers and good friends—then maybe hanging on through November 8 and doing what we need to sustain our republic isn’t such a feat of endurance. Maybe it’s just doing what needs done.

Eric Vacek, you are an Ironman.

My last training ride with Marty involved an experiment to see how fast we could cover a long Strava segment south of town. It amounted to a 13-mile gravel sprint inside a 40-mile loop. We worked together and took the segment’s top times, but it wasn’t pretty. We stopped along a dirt road to recover.

“All I want to do right now is crawl into that bush and take a nap,” Marty said. “I’d sleep with a skunk. I don’t care.” 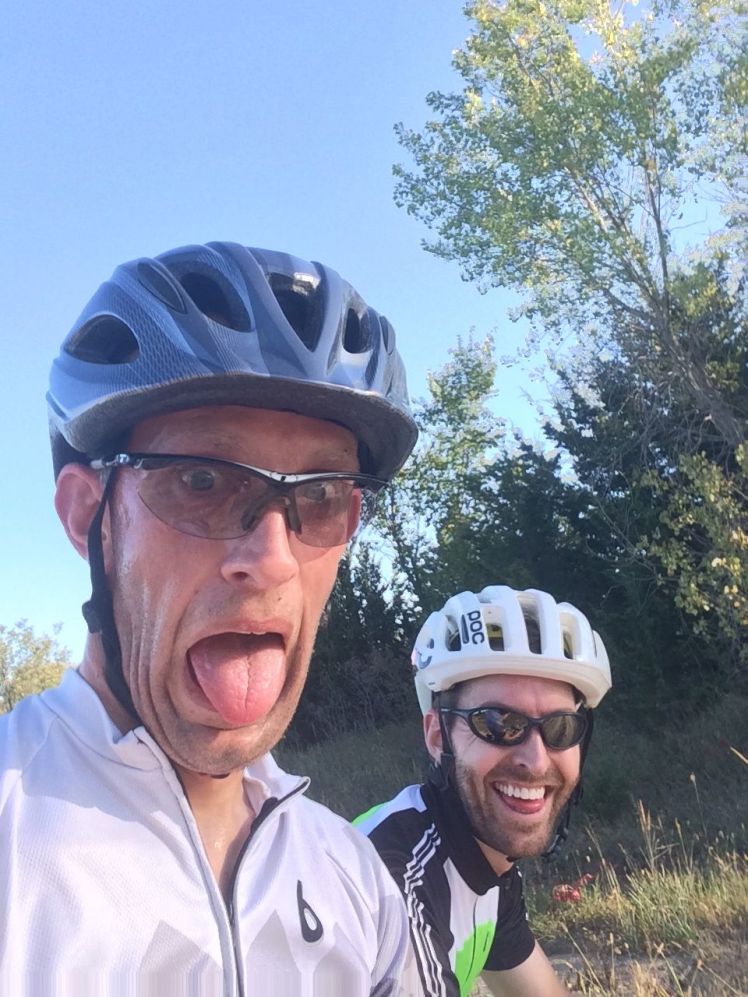 Eric and Marty contemplate a skunk-nap.

I know the feeling. But in cycling and politics, lying down with skunks is bad policy. Better to endure. We did what we had to do. We sucked it up and rode home.

One thought on “Of Ironmen and Skunks”